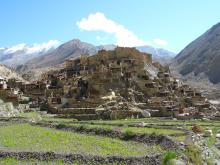 Nar and Phu are mutually intelligible variants of the TGTM (Tamangic) sub-grouping of Tibeto-Burman, and are spoken in villages of the same names in Nepal. The geo-coordinates for Nar village are (Gandaki Zone) 28° 40' N; 84°11' E, and for Phu village (Gandaki Zone) are 28°45' N; 84°15' E. The Ethnologue ISO 639 for Nar-Phu is NPA. The endoym for Nar is Chyprung and for Phu is Nartwe. Despite their close lexical, grammatical and phonological similarities, there is a good deal of cross-dialectal variation between the two. Current estimated speaker numbers of Nar are at fewer than 400, and Phu has perhaps 200 active speakers. Observations of outward emigration from Nar and Phu villages to Kathmandu or overseas, combined with data from language attitude and usage interviews and information gleaned from autobiographical texts, suggest that Nar-Phu is moribund. The vast majority of fluent speakers are above the age of fifty, and there is extreme disruption in transmission of the language to younger adults and children. The goal of this collection is to assemble a variety of texts, representing different genres, from different speakers of Nar-Phu who either had been born and raised in one of the main villages affiliated with their language, or else who had migrated to other regions of Nepal. There is no established community orthography for Nar-Phu. Therefore, the representation of the language is in IPA and the translations include English and Nepali (a contact language). These materials comprise a portion of a larger language documentation project taking place in Manang, Nepal (National Science Foundation DEL1149639 and Hans Rausing ELDP Small Grant SG0025). All materials were collected and are archived with speaker permission, and all recording practices confirm to standard Informed Consent protocols authorized by the institution hosting this language documentation project. Selected References Hildebrandt, K.A. 2013. Converb and aspect marking polysemy in Nar. Elena Mihas, Bernard Perley, Gabriel Rei-Doval, & Kathleen Wheatley (eds.), Responses to Language Endangerment: In Honor of Mickey Noonan, p. 97-117. Amsterdam: John Benjamins. Hildebrandt, K.A. 2012. Acoustic and articulatory analysis of tone in four languages of Nepal. Paper presented at the 45th International Conferece on Sino-Tibetan Languages and Linguistics, Singapore, October 26-28, 2012. Hildebrandt, K.A., D.N. Dhakal, O. Bond, M. Vallejo and A. Fyffe. 2015. A sociolinguistic survey of the languages of Manang, Nepal: Co-existence and endangerment. NDFIN Journal 14.6: 104-122. Mazaudon, M. 1996. An outline of the historical phonology of the dialects of Nar-Phu (Nepal). Linguistics of the Tibeto-Burman Area 19.1: 103-114 Noonan, M. 2003a. Nar-Phu. R. LaPolla, G. Thurgood, (eds.), The Sino-Tibetan languages, 336-352. London: Routledge. Noonan, M. 2003b. Recent language contact in the Nepal Himalaya. D. Bradley, R. LaPolla, B. Michailovsky, G. Thurgood (ed.) Language variation, 65-87 Canberra: Pacific Linguistics.

Audio-Video Items in this collection

The list below includes items from this Collection’s Subcollections.

This collection is Public - accessible to the general public